Specialized Service For Your Little One

Some children are afraid of clowns, while some get nervous in the dark, but almost every child has at least a slight fear of the dentist. We understand that it can be pretty nerve-wracking, having someone that they don’t know very well poking and prodding in their mouth. And most dentist’s offices are drab and intimidating in general, so that doesn’t help matters much. This is how My Pediatric Dentist in Montrose came to be! Oral health is incredibly important for children, and it shouldn’t be a nightmare for them, or for the parents that have to drag them in.

We made sure that our dentist’s office is welcoming, friendly, and even fun for the kiddos. We even have a pirate ship in the waiting area that they can play on and pretend that they’re sailing the seven seas! But we understand that even a pirate ship can’t take all of the fear away. That is why in this blog, we are going to be offering you parents out there some tips that we have found to work in reducing the fear that your young one experiences before their visit.

If you would like more information about our pediatric office, or your young one is in need of a trip to the dentist and you would like to make an appointment, then feel free to give us a call today!

Pretend Play a Visit to the Dentist

As we all know, a child’s imagination is a pretty incredible thing. One second they can be exploring outer space and the next they could be superheroes saving the city. So why not use this creativity to help convince them that the dentist isn’t all that bad! Pretend to be their patient, and let them check out your chompers a little bit and make a diagnosis. Obviously you don’t want to give them real dentist tools, so let them peep around with a popsicle stick or cotton swab, or even let them brush your teeth. By having them play dentist, they’ll have more interest in the practice and might even get a little excited to go see how the real dentist’s do their job!

It will be quite a shock to your child if you’ve put off bringing them into the dentist until they are older. Not only will they likely have multiple problems that haven’t been spotted since a dentist hasn’t given them an exam, but it will also be a lot for them to take in, which will only make their fear grow. You want to have a regular dentist’s visits as early as possible. In fact, we recommend that you bring them in as soon as their first tooth comes in. This usually happens around the time that they turn one. This means that they will be accustomed to the dentist as they grow older. Sure, they may never love going to the dentist, but they’ll know how important their oral hygiene is, and that the better they take care of their teeth the less intrusive their visits will be.

Yes, bribery can work with your kiddo from time to time, but we don’t really recommend promising them a special treat if they do well at the dental office. Not only will this have them wondering what is so bad about their appointment that you would offer them a treat for not making a fuss, but it also would be a little bit counterproductive to let them have a sugary candy after seeing a dentist. Instead, we recommend that from time to time you give them a sticker or a new toy (nothing extravagant or they’ll expect a gift every time). Don’t let them know they’re getting their surprise until after their appointment is over.

Let Them Know How Proud You Are 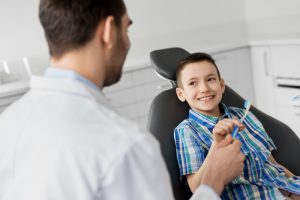 At this young age, your little one looks up to you and everything that you do. They want to make you proud and follow your lead in basically everything that they do. So try not to tell them that doing well during their exam was “no big deal”. Instead, tell them how proud of them you are, and reinforce that they are incredibly brave for how they handled everything.

For some reason, and no offense dads, but you guys are usually the ones to make this mistake but don’t tell your child any of your own ‘horror’ stories from the dentist, and how if you could get through so-and-so of an experience at the dentist, then they can handle a simple check-up. This will have their mind swirling with worst case scenarios and will only have their fear grow before it’s time for their appointment. You’re also going to want to avoid saying any words that might cause them fear. The main two here would be shot and pain. Keep conversation light, and keep reiterating to them that it’s really not that bad.

Bring Them Into Our Office Early

From the TVs in our exam rooms to the (of course) pirate ship you’ll see as soon as you step in, My Pediatric Dentist Montrose is an exciting and fun environment for the young ones. In order to really let them have a good time and to calm down their nerves, we highly recommend that you bring them in early so that they can get some play time in before they see their dentist. They’ll have a blast pretending to be a pirate and will forget about how they were scared to come in. In fact, we’ve found that some kids don’t want to leave even after their appointment is done.

Now we’d like to be optimistic, but the reality of it is that your child is probably going to fuss a little bit. It’s common. But if you follow these tips and have them coming to our child-friendly office, it won’t be that bad at all! If you would like to learn more about our dental services and our office, or you’re looking to make an appointment for your child, contact us today!